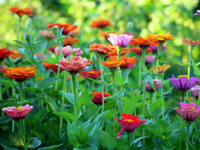 Following on from last year's success, North West in Bloom judges have awarded even more top accolades for locations and projects in Cheshire West and Chester.

The Council's whole borough entry including Chester in the Large City category scooped a Silver Gilt, as well as the 2022 Award for Commercial Effort.

This is the result of the hard work of many 'Friends of' groups and volunteers across the borough being recognised by the North West in Bloom judges who visited the area during the summer.

Other award winners included towns, villages, schools, farms, a food hub, a station and a cemetery. Hadlow Station received both a Level 5 Outstanding Award and a 2022 Heritage Award.

The Council's Director of Environment and Communities, Maria Byrne said:

"I'm delighted the Council was able to support so many wonderful entries for this year's North West in Bloom competition and I would like to offer my heartfelt thanks and warmest congratulations to all the volunteers and groups involved in improving their community and bringing people together to make a positive change to the place they live, work or spend their leisure time.

We were very proud of what we were able to show the judges and the results reflect the hard work of everyone involved in this year’s entries. This is a wonderful way to recognise the achievements of organisations and community groups across west Cheshire. Together, we can ensure our borough continues to thrive, long into the future and the results can be built upon to further improve our natural environment."