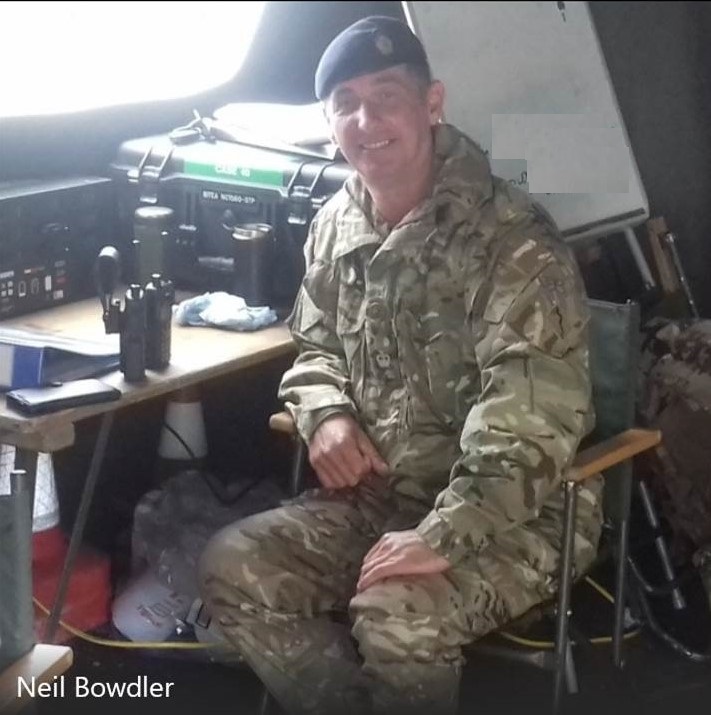 Major Neil Bowdler, is an army reservist with Cheshire West and Chester Council. His normal day to day role is as a front line manager for the Council’s Street Care service, but for the past 8 months Neil has been seconded to the COVID-19 response team. He is currently the Operational Delivery Lead Manager for the service.

Neil has been in uniform one way or another since the age of 14 when he joined the army cadets. After enlisting in the Army Reserves he has been a peacekeeper with the United Nations, helped to deliver the Olympics Games and in 2020 he was mobilised to his army role for 6 weeks to help support national efforts to deal with the impact of the Coronavirus pandemic.

Neil is keen to emphasise this response was a monumental team effort by all members of the regular and reserve armed forces : Regular and Reserve members of the Army, Navy and Royal Air Force from across the UK came together to support the nation through the unprecedented challenges presented by COVID-19, not just in this country, but also overseas in Commonwealth countries. From contributing to the highest level Government and scientific decision-making to swabbing tonsils in test centres (and everywhere in between), the military has been present at every level of the response the pandemic, with thousands of military professionals deployed to work alongside joining the NHS and local authorities each day.

Neil says, “A huge strength of the military response is resourcefulness and an ability to react rapidly to an -evolving situation. The combined military response to the Coronavirus pandemic took place alongside the usual ongoing peacetime commitments. Armed Forces personnel still had to maintain a response to national and international incidents such as floods, fires and national disasters which didn’t stop just because there was a pandemic going on.

This year has really shown the incredible resilience of our Armed Forces. Their response to the pandemic has been nothing short of remarkable.”

Neil skills and experience in logistics are invaluable to both his work with the Council and his military duties. Both organisations have been able to benefit from his experience of complex operations, especially over the last 15 months.

Whilst mobilised alongside his regular colleagues, Neil worked as part of a small team in Northwest Headquarters in Preston. The Logistics team were responsible for the ordering and distribution of everything from vehicles to precious PPE (Personal Protective Equipment) to getting people accommodated in hotels that were officially closed!

From early during the first lockdown military personnel were mobilised to set up and operate mobile testing units nationwide as well as setting up Nightingale hospitals around the country, which have provided additional care capacity for Coronavirus patients.

Military planners have been deployed to assist the Vaccine Task Force while a further 200 personnel have been working on the logistics of the Vaccine Deployment Programme.

Armed Forces medics and personnel delivered many of the first tests and vaccinations and are still supporting local authorities, the NHS and other partners to deliver the enhanced response support announced last week for areas such as Cheshire West and Chester which have seen a dramatic increase in levels of the Delta variant of COVID-19.

Staff at the Defence Science and Technology Laboratory (Dstl), Porton Down, have been working to help reduce the spread of the coronavirus and also support testing capabilities.

Hundreds of military personnel supported ambulance services across the country with more than 100 specially trained to drive oxygen tankers.

Joint Helicopter Command, an aircraft force comprising all three services, was put on standby to be used to reach "isolated communities that may not be able to obtain urgent medical care", according to the MOD.

Neil says, “Many members of the Armed Services had to make some big sacrifices: many were about to go on leave that had to be cancelled for, potentially, six months. It was all a concerted effort on the part of the Army, Navy and Royal Air Force regulars, reservists and medics and I’m not always sure the public actually realises that.”

The public support and recognition of the works of our Armed Services community is a great morale boost for them and their families. Let’s all take the time to say ‘thank you’ to them this week.

The Catholic High School Chester was one of 21 local schools that contributed to a new report, It...
Next story

When a teenage James Howell from Ellesmere Port started ‘mixing with the wrong crowd,’ his life h...